Dollar tries to shrug off the pressure

Investors spooked by strong US data

Dollar back under pressure after short-lived relief

Greenback stays on the defensive nearly across the board

Large banks will be tested against two scenarios featuring severe recessions to assess their resiliency under a range of outcomes. The Board will release firm-specific results from banks’ performance under both scenarios by the end of this year.

The Board’s stress tests help ensure that large banks are able to lend to households and businesses even in a severe recession. The exercise evaluates the resilience of large banks by estimating their loan losses and capital levels—which provide a cushion against losses—under hypothetical recession scenarios over nine quarters into the future.

“The Fed’s stress tests earlier this year showed the strength of large banks under many different scenarios,” Vice Chair Randal K. Quarles said. “Although the economy has improved materially over the last quarter, uncertainty over the course of the next few quarters remains unusually high, and these two additional tests will provide more information on the resiliency of large banks.”

The two hypothetical recessions in the scenarios feature severe global downturns with substantial stress in financial markets. The first scenario—the “severely adverse”—features the unemployment rate peaking at 12.5 percent at the end of 2021 and then declining to about 7.5 percent by the end of the scenario. Gross domestic product declines about 3 percent from the third quarter of 2020 through the fourth quarter of 2021. The scenario also features a sharp slowdown abroad. 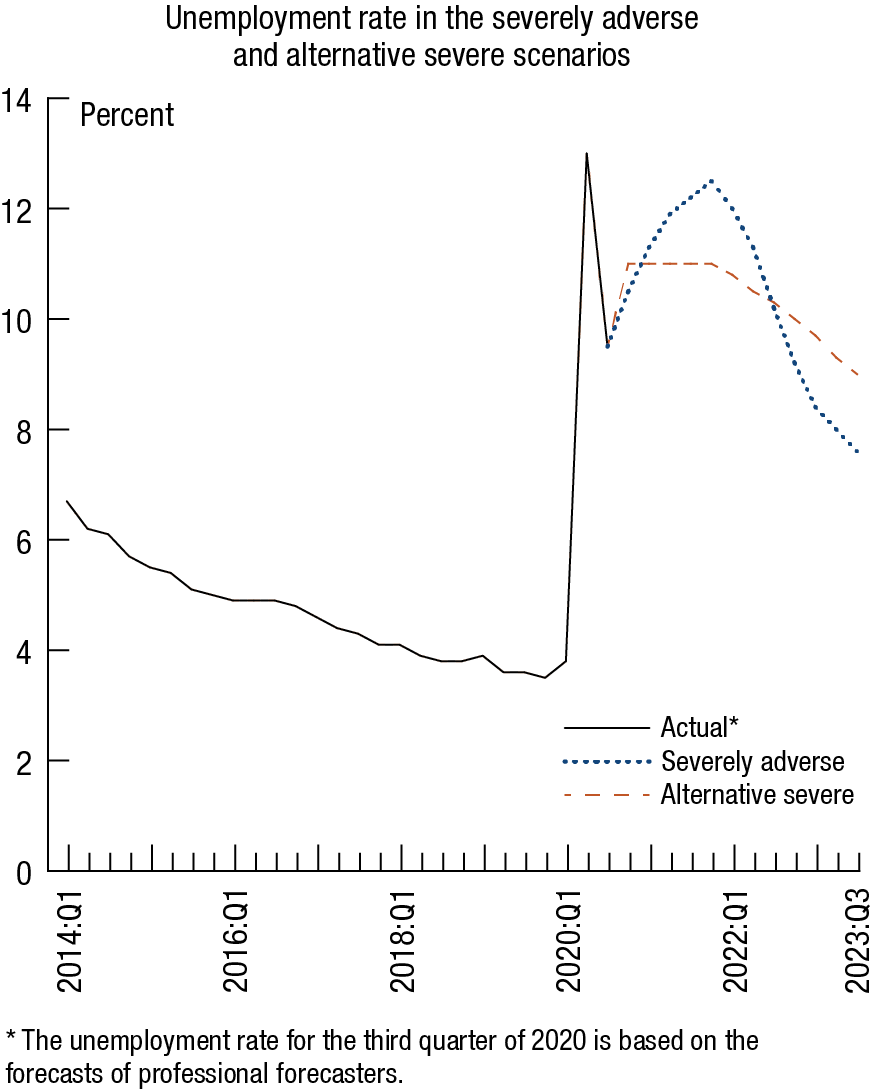 The two scenarios also include a global market shock component that will be applied to banks with large trading operations. Those banks, as well as certain banks with substantial processing operations, will also be required to incorporate the default of their largest counterparty. A table below shows the components that apply to each firm.

The scenarios are not forecasts and are significantly more severe than most current baseline projections for the path of the U.S. economy under the stress testing period. They are designed to assess the strength of large banks during hypothetical recessions, which is especially appropriate in a period of uncertainty. Each scenario includes 28 variables covering domestic and international economic activity.

In June, the Board released the results of its annual stress tests and additional analyses, which found that all large banks were sufficiently capitalized. Nonetheless, in light of the heightened economic uncertainty, the Board required banks to take several actions to preserve their capital levels in the third quarter of this year. The Board will announce by the end of September whether those measures to preserve capital will be extended into the fourth quarter.

Track the pulse of the market

Dollar tries to shrug off the pressure

Investors spooked by strong US data

Dollar back under pressure after short-lived relief

Dollar off lows but remains fragile

Federal Reserve begins 2020 Census of Finance Companies and Other Lenders

95
No Result
View All Result